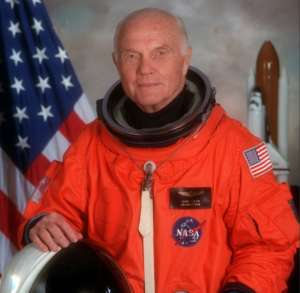 John Herschel Glenn, Jr., was born in Cambridge, Ohio, on July 18, 1921, the son of John Herschel and Clara Sproat Glenn. At age two, young John moved with his parents to New Concord, where his father opened a plumbing business. After relocating to New Concord, the Glenns built a home that doubled as a rooming house for students from nearby Muskingum College. Glenn would write many years later of his childhood, “A boy could not have had a more idyllic early childhood than I did.” Surrounded by older students, encouraged by a father who liked to travel, and tutored by a devoted mother, John developed an early interest in science, a fascination with flying, and a sense of patriotism that would define his adult life. He graduated from New Concord High School and attended Muskingum College.

Shortly after Japan attacked Pearl Harbor, Glenn enlisted in the Naval Aviation Cadet Program and became a Marine pilot. He flew 59 combat missions in the South Pacific during World War II. When the Korean conflict began, Glenn asked for combat duty and flew 63 missions. For his total of 149 missions during the two wars, he received many decorations, including the Distinguished Flying Cross six times.

After the Korean conflict, Glenn attended test pilot school and then joined the Naval Air Test Center’s staff of expert flyers. He served as a test pilot for Naval and Marine aircraft, including the FJ3, the F7U Cutlass, and the F8U Crusader. One of Glenn’s most notable accomplishments during this period was the 1957 speed record he set flying from Los Angeles to New York in three hours and 23 minutes. “Project Bullet” secured Glenn’s reputation as one of the country’s top test pilots and provided a stepping stone for his participation in the emerging space exploration program.

Glenn’s experience and skill made him a logical candidate for the astronaut corps being formed during 1958. He entered the space program as a participant in the National Advisory Committee on Aeronautics’ “G” force tests. When NASA put out a call for pilots to participate in its suborbital and orbital program, Glenn volunteered without hesitation. In 1959, NASA selected him as one of the first seven astronauts in the U.S. space program. On February 20, 1962, atop an Atlas rocket, he rode into space and piloted the Friendship 7 spacecraft around the globe three times, becoming the first American to orbit the earth.

Glenn’s ride into space, a great technical accomplishment, held even greater significance for the country. Having lagged behind the Soviet Union in the “Space Race,” Americans saw the event as a political as well as scientific milestone. Across the country, they welcomed Glenn as a hero who had conquered the bounds of earth and given new wings to America’s spirit.

John Glenn, the pilot and hero, soon found NASA’s plans for him did not include another flight assignment. While he continued to serve as an advisor to NASA until 1964, his interests increasingly turned to public affairs. Encouraged by Bobby Kennedy to seek public office, Glenn retired from the Marine Corps as a colonel the following year to run for the United States Senate.

He entered the Ohio Democratic primary challenging the incumbent Democratic Sen. Stephen M. Young. An accident forced him to leave the race early in the campaign and to put his political career on hold. After recovery from the accident, Glenn joined Royal Crown Cola as vice president and then president. Still interested in public service, Glenn again ran for the senate. His opponent, Howard Metzenbaum, defeated him in the 1970 primaries. Four years later, Glenn made a third run for the senate. This time he was successful, easily winning over his Republican opponent, former Cleveland Mayor Ralph J. Perk.

Astronaut Glenn now became Senator Glenn. In this new career, he represented Ohio and took a leading role in weapons control and government affairs. He was chief author of the 1978 Nonproliferation Act, served as chairman of the Senate Government Affairs Committee from 1987 until 1995, and sat on the Foreign Relations and Armed Services committees and the Special Committee on Aging. Never far from the center of Democratic politics, he was a contender for the vice presidential nomination three times and ran in the Democratic primaries as a presidential candidate in 1984.

Glenn announced on February 20, 1997 that he would retire from the senate. A year later, NASA invited him to rejoin the space program he had helped to create as a member of the Space Shuttle Discovery Crew. Glenn accepted the invitation and on October 29, 1998, became the oldest human ever to venture into space.

John Glenn, Marine, pilot, astronaut, corporate executive, and senator, has taken on a new role. Upon his retirement from the senate and return from space, John and Annie Glenn founded the John Glenn Institute for Public Service at the Ohio State University. Through its programs, they seek to improve the quality of public service and to encourage young people to pursue careers in government. The Glenns also served as trustees of Muskingum University, their alma mater.

John Glenn died on December 8, 2016.  He was laid to rest in Arlington National Cemetery.